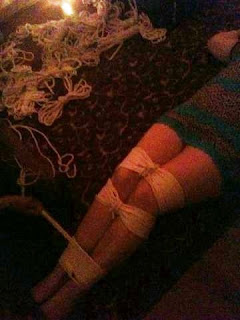 Being tied up by a friend..
I can remember my first time I was interested in bondage. I was really young and watching Doogie Houser MD.. It cracks me up to recall it just because its so random. There was an episode where Doogie Houser had to restrain a combative patient. She was tied to the bed limb by limb, legs spread eagle and arms apart. There was something so hot about the doctor being in total control, yet taking such care of the patient, something that excites me to this day. I know I masturbated to that many times and this was yearrrrrrs before i was sexually active.

My first bedroom rope experience happened when I was about 21. I had been dating a fireman who was very outdoorsy and always was on his bike, out fishing, going on hikes and a bunch of other shit I just wasn't interested in. I guess you could say I like to live more in my head, I like to learn, read, I love movies (horror especially) and anything that can make me feel or think about people or places from another perspective. He always made me feel like I was too wild for him. From what I would wear to what I wanted to do, I always felt like I was pushing his limits and I really liked it while it lasted. He was just one of the guys I dated & had to teach about what gets me off. I often find myself taking my men I date out of their comfort zone & thoroughly enjoy that aspect of new relationships.
Shortly after we moved in together there were pretty bad fires and he had to go with his crew for about two weeks and I really didn't talk to him much while he was away. I remember him coming home with all his equipment and throwing it in a drawer.... & we caught up ;) afterwards we went about our day. I remember going through all his gear and being fixated on that rope of his. It was just regular soft white rope to anybody else but to me it was so much more.. I made sure it was found on the bed next time he entered the bedroom & explaining how i wanted to be tied up by him.. having him tie me up for the first time was so pleasurable I began to beg him to do it all the time.

Its been a while since Ive gotten lucky enough to get bondage in the bedroom but hopefully ill meet some rope fetishists and we can satisfy each others kinks.. 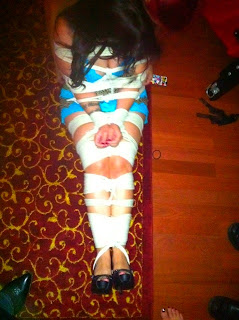 Pictures shown in this blog were taken at a party. Email me to book a bondage or other type of session.
Posted by Sheri Darling at 1:11 PM